I especially love Green Papaya Salad for its spicy, sour and sweet flavors . It is often served along side Chicken Satay and a portion of sticky rice .

Som Tam can be easily added to your diet plans as It’s really light, full of vegetables with some protein , very little fat and the best part is that it is full of flavor.

8-10 Thai bird chillies , each cut into 3-4 segments Or any hot chilies of your choice
4 cloves garlic, peeled
1 Tbs. small dried shrimp ( i did not use any )
2 -3 cups julienned peeled green papaya – in strips ( make sure that the papaya is not ripe )
1/2 cup 1″cut long beans (substitute with regular green beans)
3Tbs thick tamarind juice ( or 1 tbs market bought pulp)
Juice of 1 lime, or as per taste
1 Tbs. fish sauce, to taste ( I used soy sauce )
2 Tbs. palm sugar, melted with 1/2 Tbs. water into a thick syrup ( Indian jaggery sugar or brown sugar can be substituted for palm sugar )
1 small tomato, cut into bite-size wedges; or 6-8 cherry tomatoes, halved
2Tbs chopped unsalted roasted peanuts or as requires

Using a large mortar and a wooden pestle, pound the garlic and chillies to a paste.

Add the dried shrimp( I did not use any ) and long beans and pound so that long beans bruises a little .

Follow with the green papaya . Stir well with a spoon and pound to bruise so that they absorb the heat and flavor of the chillies and garlic.

Mix well to blend the vegetables with the flavorings and seasonings. Taste and adjust flavors as desired ( it should be spicy , sweet and sour ).

Now add the tomato pieces, stir and bruise lightly to blend in with the rest of the salad.

Transfer to a serving plate and serve sprinkled with peanuts. 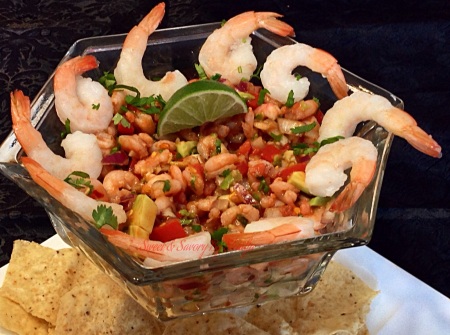 We love some salsa, and often combine whatever we have on hand to make them . This shrimp salsa is gluten free , low fat & low in carbs with lots of tomatoes and avocados . We like to eat this Salsa all by itself , with tortilla chips or wrapped in a warm tortilla . There is also no oil or added fat, making this a skinny salsa.

Place the cooked shrimp in a large bowl. Stir garlic, red onion, and cilantro. Mix in tomato , ketchup, lime juice, hot pepper sauce, and horseradish. Season with salt. Gently stir in avocado. Cover, and refrigerate at least for an hour . Serve in one large bowl along with tortilla chips or crackers of your choice ….

Tandoori chicken is a popular North Indian dish consisting of roasted chicken prepared with yogurt and spices. The name comes from the type of cylindrical clay oven, a tandoor, in which the dish is traditionally prepared.

1. Remove skin from chicken pieces, and cut slits into them .Place in a shallow dish.
2.In a medium bowl, combine yogurt, garlic,ginger paste ,lemon juice , garam masala, cayenne pepper and salt . Mix until smooth. Stir in yellow and red food coloring. Spread yogurt mixture over chicken. Cover, and refrigerate for 6 to 24 hours . Longer the better .
3.Preheat an outdoor grill for medium high heat, and lightly oil grate.
4.Cook chicken on grill until no longer pink and juices run clear. Garnish with cilantro and lemon wedges and serve with Onion Rings and Cilantro mint chutney . 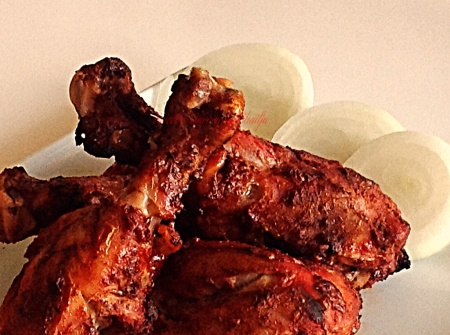 My Mom used to make lots of ketchup when we were kids so Called Mum in India and asked for her recipe . I have made a little change in the recipe according to my and my kids taste buds .
I wanted to make Hot & Sweet ketchup so used red chilies along with dark brown sugar & instead of using Sodium benzoate , I used cider vinegar . This ketchup is free of all the preservatives, colours, emulsifiers …
The recipe calls for a spice bag….its nothing just tie up the spices in a cloth and dunk into the tomato puree while it is simmering. 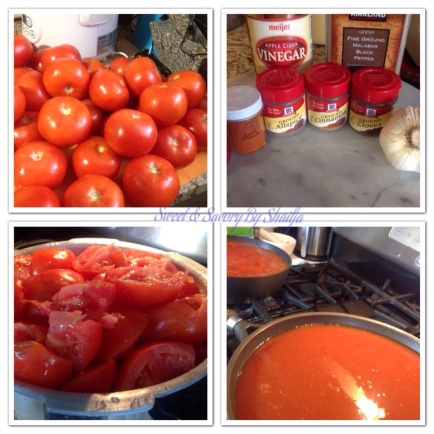 1. Wash and chop the tomatoes. Chop garlic and onions. Put them into a pressure cooker.

2. Let it cook for 1 or two whistle. Allow it to cool and open when completely cooled.

3. Put this pulp into a blender and given it a run, pass this through a sieve into another large vessel.

4. Add the sugar, salt, vinegar, and the spice bag into it and put on fire and once it boils, reduce heat and let it simmer till thick and water evaporates .

Cook the tomato sauce till it becomes sufficiently thick in texture(make it so thick that when poured from a height it should come down in lumps and not flow freely).

Ketchup can easily be refrigerated for up to 6 months .

I CAN my ketchup

If You plan to Can…

Put 1 Tbsp. of the lemon juice in each of the 4 sterile jars. Transfer the hot tomato ketchup to the hot jars, leaving about 1/2 inch of head space at the top. Screw on the lids, put the jars in a canning rack, and lower them into the boiling water in the canning kettle. Process for 40 minutes.
Remove jars and let them cool. Store in a cool, dark place (a cupboard or pantry works great) until ready to use. 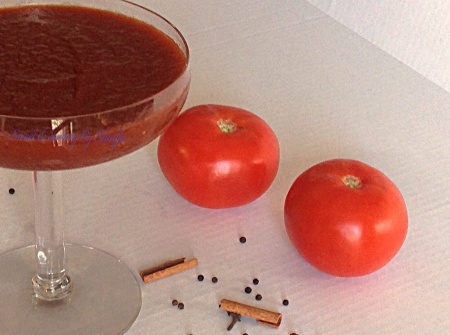 I know that cooking without oil might not sound like fun, but use the oil for the main events and parties . It will take a little time for your taste buds to adjust to no oil . The dishes actually turning out pretty delicious, the effect of zero oil food can only mean one thing – a healthier you.

Today I am bring to you low fat chicken Curry with absolutely no oil. Yes, you are reading it correctly . This healthy, easy to cook yet so tasty oil free chicken will surely be a crowd pleaser .

For marinating the chicken we will be needing

Mix the chicken with all the ingredients under marination and Let it marinate for at least 1 hour. Over nigh is the best .

For the Gravy we will be needing

In a pan , wok , dutch oven or a non stick pan combine all the ingredients in the order mentioned above, except for the coriander leaves, and cook on a medium flame for approx 35 minutes, or till the chicken is done. Tada, oil free chicken curry is ready! Garnish generously with coriander leaves. 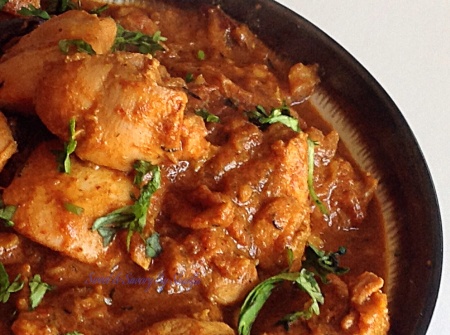 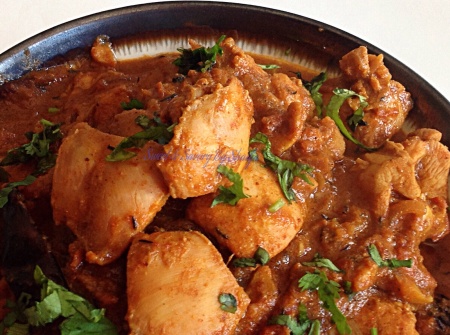