Hydrabadi Mutton Biryani is a mouth-watering spicy and fragrant biryani from the land of the Nizams.
Hydrabadi mutton biryani is a traditional style of making the biryani by cooking the raw meat with whole spices and then covered with rice, fresh mint leaves, saffron milk & fried onions and kept on dum until done.

There are two styles of Hydrabadi Biryani . Kacchi dum biryani and Pakki dum biryani . Kachi biryani is prepared by marinating the meat with spices and yoghurt overnight and then 3/4 cooked rice is placed on top of the raw meat and cooked in dum.
Whereas for Pakki dum biryani we cook the mutton and rice separately and then layer them and cook on dum for 30-45 mins .. 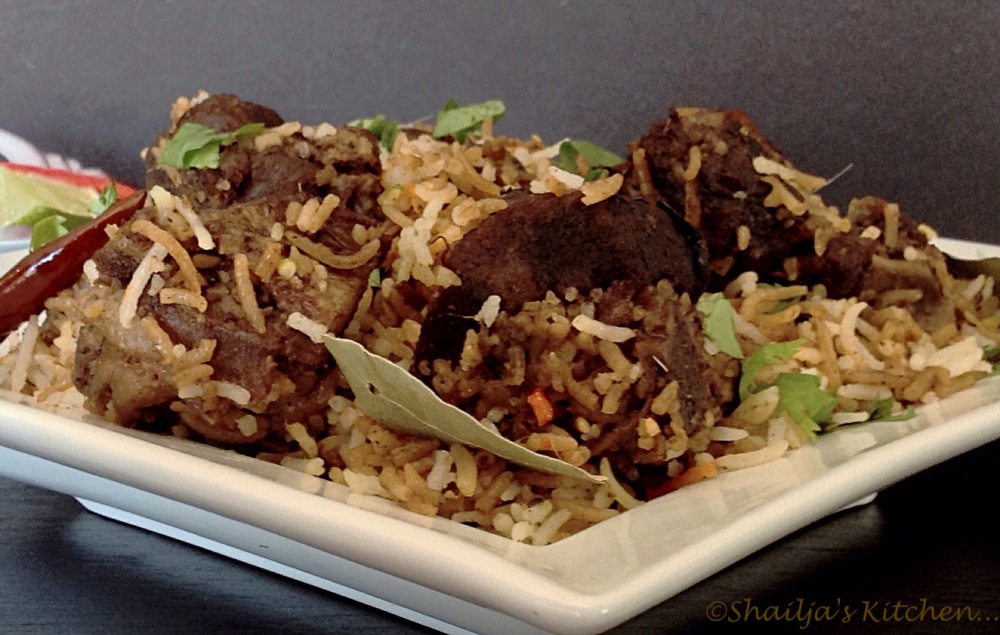 It is a bit tedious recipe, but the outcome is so delicious that every minute spent on cooking this is well worth it.
For this spicy treat we will be needing

Clean and cut the goat meat into medium pieces .

Mix all the ingredients of the marinade and marinate mutton pieces for at l2 hour , preferably overnight in the refrigerator .
Cook the meat with ½ the oil in a pressure cooker. Do not add any water as yogurt & meat will release its own water .In the pressure cooker it takes 2 to 3 whistles for the meat to get tender and 5 minutes on low flame to cook. Let it cool. Once the pressure in the cooker is released open it and cook the meat till all the water evaporates.
OR
You can cook the meat on the stove top until tender (about an hour or so )

Squeeze the lime juice on the meat and mix well.

In a pan, heat oil and fry the onions until light golden brown.

In a big pot bring water to a boil, add all the spices ( Spices for boiling rice ):

Add rice and continue to cook until the rice is almost done. It takes about 7-8 minutes . Drain the rice and keep aside.

Preheat the oven to 400 degrees F.

Grease large baking tray with oil, layer half the rice at the bottom.
Sprinkle some oil, fried onions and ½ the saffron milk.
Layer the meat over the rice followed by a layer of remaining rice.

In the end We will have 2 layers of rice with one layer of meat in between .

Top it off the remaining oil, fried onions and saffron milk. Cover the tray with aluminum foil.
Bake the biryani for 10 minutes on 450 degrees F and then for 20 minutes on 400 degrees F. The total bake time is 30 minutes,

Mix the rice and serve with raita .

Note :
Marination is important ,this way the meat get tenderize with yogurt n blends with spices and gives u soft, juicy n spicy mutton.

You can even use beef or chicken instead of Goats meat .

There are plenty of ready biryani masalas available in indian and Asian stores . One of my most favorite brand is Shaan . You can follow the instruction at the back of the package .

Marchwagan mutton is a famous Spicy meat based cuisine from Kashmir . Meat is cooked using whole spices along with Kashmir red chili powder as its main ingredient . Kashmiri red chillies gives beautiful red color to the gravy without making it too spicy . Paprika is a good substitute for Kashmiri chilies…

Mix 3 tbs kashmiri red chili powder in 3 cups warm water and keep aside .
Heat 4 tbs oil in a dutch oven or a pan .
Add Green cardamom and cloves to the hot oil making sure tgey do not burn .
Now add the meat and stir well .
Add cinnamon stick and black cardamom to the meat .
Cook the meat on medium heat, stirring in between until the meat turns brown .
Once the meat is brown , add ginger powder, fennel powder , turmeric powder and salt and mix well .
Now add half of the Kashmiri red Chili Powder water and cook the meat on medium to low heat ( you can even use the pressure cooker )
Keep on checking the meat stirring occasionally and add rest of the chili water when required .
Once the meat is tender add 1/2 cup warm water and garam masala and let the meat cook uncovered till the curry becomes thick .
Serve hot with Naan, Roti , Chapati or steamed rice .
I have served this mutton curry with Indian Chapati. Along with steamed rice and stir fried crispy baby potatoes . Recipe can be found HERE..

Note :
I had to add extra 1cup of plain water for the meat to get tender..
You can even use pressure cook to make the meat tender .
I have used goats meat for this recipe . You can use any meat or poultry of your choice. 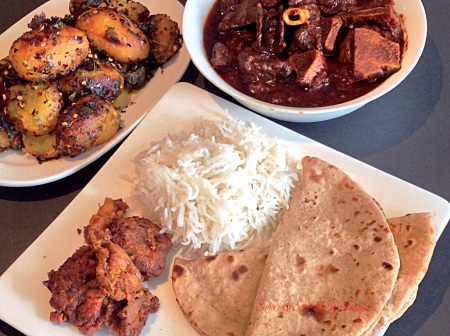 There’s nothing complicated about cooking in clay pots . Traditional clay cooking pots are used all over the world . Today I am bringing to you another recipe of Mutton Curry cooked in ClayPot on direct flame ..

Heat oil / ghee in a clay pot .
Add whole garam masalas and whole red chilies and let it splutter for a minute. Now add finely chopped onions, salt and mutton .
Stir and mix well. Sauté for 8-10 minutes.
Now add ginger garlic paste and sauté for 5 minutes.
Add red chili powder, coriander powder and cumin powder.
Mix well and cook on medium slow flame for around 20-25 minutes till oil leaves the masala.
Now add ½ cup of water and bring to a boil .
Cook covered on medium low heat until the mutton is tender stirring a few times in between . It takes around 1 hr for the meat to get tender in a clay pot.
Once the mutton is tender , add garam masala powder and adjust the seasoning. Garnish with fresh coriander leaves and serve hot with roti , naan or any flatbread and steamed white rice .. 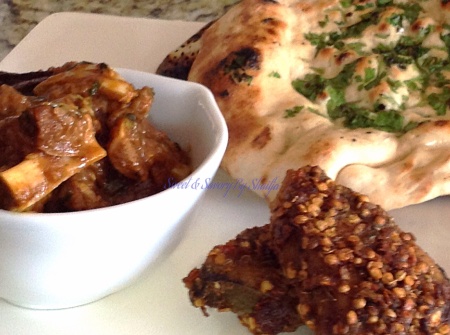